One of the hallmarks of Renaissance art and architecture is stability in composition and design in both art and architecture. The desire of the Renaissance artists and architects (often one and the same person) was to create a sense of solidity and permanency in all that they did. This required, as they discovered, adherence to some basic laws of math. They discovered ratios that universally achieved balanced, pleasing designs. Graphic designers, especially web designers, could learn much from this.

Grid based design and HTML

Web designers for some time eschewed grid based layouts. This was due in large part not to a disdain for grids, but rather a lack of HTML suited to the task. Table-based layouts where the pinch-hitter stand in that ended up going 313 innings for no other reason than there was no other way to get the job done and stay in the game. Then along came CSS and most designers immediately shuddered and 1) embracing a new way of doing layout since tables and “1px transparent gif shims” just worked and it was predictable. Not easy to edit, those tables, but they were predictable. CSS layout, or “tableless layout” as it was first monikered, was not easy to grasp nor easy to implement. After about five years of bickering and reluctant education, along with much CSS griping,  graphic designers en masse adopted CSS layout.

With the advent of easy-once-you-know-how-to-use-them CSS layouts (“easy” might still reasonably be called a relative term), the focus sharpened on grid based layouts. Today, there are entire CSS frameworks built on Grids. The 960 Grid System system is the foremost advocate of this design / CSS approach to solving the problem. Any system is going to have it’s strengths and constraints, but the 960 system works for many people. There are many ways to achieve a grid based system, from open source collaboratives to home-spun frameworks adapted to a graphic designers own peculiar way of working. But what about results? And how does this connect to the Renaissance?

Grids and the Renaissance artists

The Renaissance has had a permanent affect on all Western architecture present to this day. Of course, we have to go all the way back to Greek architecture to give full credit. But let’s stick to Renaissance for now, since it was during that time that a clear and communicable rationale was established for their methods of design and architecture.

By way of a quick musical analogy, a famous musician (nobody know who for sure) was once asked in an interview about what notes or scales he chose while improvising. The musician responded “writing about music is like dancing about architecture.” Well, in this case, writing about grid based layout is like designing a building about poetry. Instead, lets look at some pictures.  So here are 6 Renaissance building fascades and 6 grid based layouts. We can see immediate parallels to the idea of header, footer, side bar, main content, etc. One obvious note is that a building is going to have a grid layout focus exactly upside-down compared to a web page. We don’t (not usually anyway) enter a building at the top floor, but we do enter a web page that way. Hmm…imagine a site that scrolls up? There’s a thought…Enjoy!

The Uffizi, built for Cosimo I de Medici in the mid-16th century

This is a detail of the upper level of a block of commercial buildings in Stratford, Ontario

The Facade Of San Lorenzo, Florence 1516 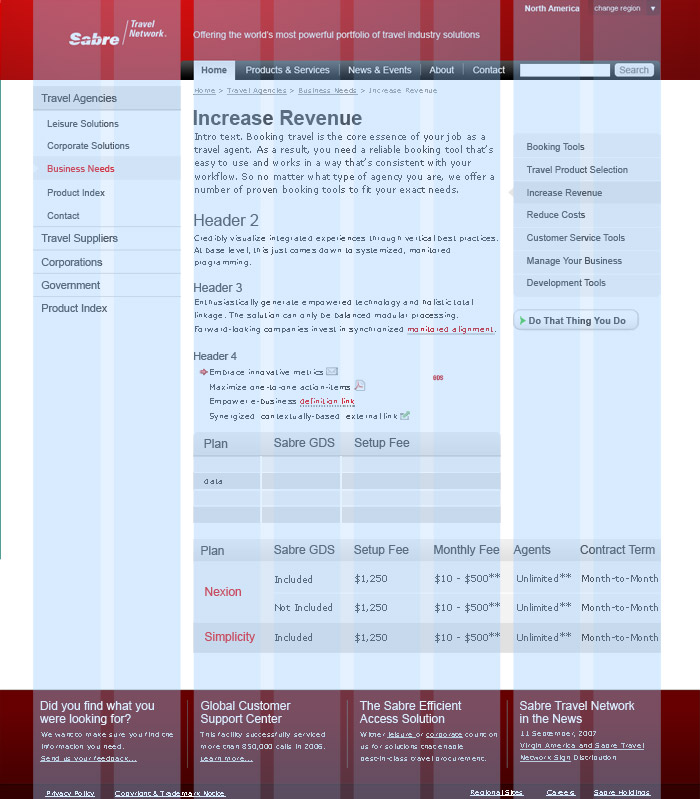 Further reading on grid based design

We’ve worked together as freelance graphic designers in one capacity or another since the early 90’s. She’s now broke out into her own style and direction apart from mine and the work we’ve done together over the years.

In the early days, Mary was the brains behind the marketing and 100% the catalyst in all our new business directions. She did production, research, and art direction for years in our home-based graphic design studio. The last several years she has sharpened her focus on style, focusing on solid grid-based design and smart use of white space and color. I think the results speak for themselves!

So stop by and visit my favorite new graphic design portfolio at marybonneville.com!

Over the next few days, I’ll have the new blog coming together, built on Theme Hybrid, a WordPress theme framework. I’ll be using the “Skeleton” child theme which is really just the raw output of WordPress with all the HTML tags in place, together with a complete bucket load of empty CSS styles ready for me to fill in. This will be an experiment! I’m used to coding from scratch, but the classes and reasonably semantic names of the HTML tags of Theme Hybrid should make this a relatively easy endeavor.

I couldn’t bare to look at the temporary theme with no header up there on top of the new blog, so I tossed my new header (which is wraping because it was too short). So, yeah, the site looks befuddled as of 9/03/2009. Don’t let that fool you!

Going to WordPress from (rather, in addition to) Expression Engine feels a bit like giving up my chisel, hammer and leather apron for a lathe, band saw, and lab coat. However there is so much packed into WordPress, and Theme Hybrid in general, I’m looking at it quite differently. Different solutions for different problems indeed, but in wanting ever to be the craftsman, it feels strange and liberating to hand over the custom functionality I’m used to creating in ExpressionEngine to the WordPress backend. It is very, very powerful stuff!

As a freelance graphic designer, time is limited, and time is money. When it comes to publishing on the web, the key is speed and ease, since spending time on a fully-customized blog or web tool is simply counter productive, when at the end of the day, it would take months of work to equal what WordPress with Theme Hybrid (or any of the other popular frameworks) provide practically right out of the box.

HOW TO MAKE INSPIRED FONT COMBINATIONS (without spending all day clicking things).

Or get the PDF eBook version, INSTANT ACCESS, 40% off Retail, now at the BonFX Store